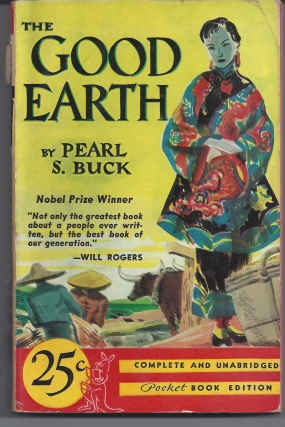 Good morning Book Lovers, today we will talk about Vintage Paperbacks, a frequently overlooked and underrated area of collecting but is truly interesting and a time of fun to collect; not to mention affordable.

To begin though we have to go back to the origins of the Paperback.  Now there have been books published in "softcover", what is frequently called "wraps" ever since the 19th century.  Dime Novels, Yellow Backs, Penny Dreadfulls, were books published cheaply for the masses and no different that the paperbacks of today, they were sensational in nature and tried to attract the reader with enticing titles and cover illustrations.

However, these different than 20th century "Mass Market Paperbacks" in that this was the only format that these books were published.  In the 19th century, books were extremely expensive for the average person and the types of stories found in these cheaply made books wre though too low-brow to be published in cloth.

Now, paperbacks did begin to publish original stories in the second part of the 20th century, originally the Mass Market Paperback was created to  reprint literature, even "high-brow" literature, that was originally published in hardcover.   It was a way to bring culture to the masses by producing a book that was affordable to be purchased by the general public and made cheaply enough to be produced in huge volumes.  There had long been publishers who made cheap reprints of novels such as A.L. Burt and Grosset and Dunlap, but these were still hardcover.  The idea was to print something small yet readable and portable enough to take it with you wherever you went.  Something you could put in your back pocket.

Enter Pocket Books, which published the very first Mass Market Paperbacks and had become so popular that for years all paperbacks, regardless of publisher, were known as pocketbooks.   It was the brainchild of one Robert De Graff who founded the company in 1938 and had the backing of the even then publishing giant Simon & Schuster who naturally wanted a way to get more people interested in the titles they published.

Which brings us to our Book Of The Week.  In the fall of 1938, Pocket published the very first Mass Market Paperback, Pearl S. Buck's "The Good Earth" .  I was an unpriced and unnumbered prototype of only 2000 copies with very limited distribution and is the rarest and most valuable paperback with only a dozen or so copies still known to exist.  If you ever find one of these babies in really nice condition you will likely become about $20,000 or so richer.

The first 10 titles, which were indeed numbered 1-10, were published by Pocket for mass distribution was June of 1939, and as the print runs were only about 10,000 copies each, these are naturally quite scarce and very desirable.  Especially #1, James Hilton’s “Lost Horizon”, which is a great read by the way.

Oddly enough, they did not print “The Good Earth” again until the next batch of titles were released and it came out as #11.   This will set you back a good $100-$200 depending on condition.  What I have available is the printing that came out right after. Still #11 with a published date of September, 1939.  At only $20, it is one reason why I referred to Vintage Paperbacks as a very affordable area of collecting.   For not a lot of money you can get at least a small bit of publishing history.

Of course, the rest is publishing history.  Other publishers came out of the woodwork when they saw how popular paperbacks were becoming,   Avon, Ace, Popular Library, Dell, Ballantine, Berkley, Bantam and so many more began printing hundreds of thousands of copies and paperbacks became truly ubiquitous.  Airports, naturally, drugstores, newsstands, department stores, all carried paperbacks.

Part of the success of course was the sensational cover art that lured the reader to that particular title, no different than it is today, 80 years after the paperback was published.  But paperback cover art, not to mention dust jacket art, is a story for another day.

Click here if you would like to see our current selection of over 600 vintage paperbacks.  Still working on pictures for the lot of them but let me know and I can send a scan.

Thanks all for reading and looking.  See you next week.