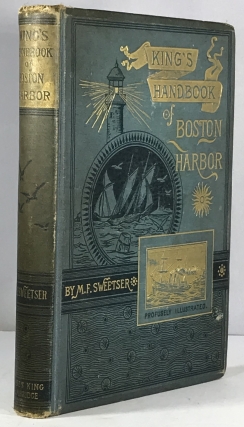 Ok, so I acknowledge that I'm a homer; born in raised in a small town just outside of Boston, on the other side of Boston Harbor from Logan Airport, called Winthrop.  I love my hometown and Boston passionately and I didn't realize how great it was until I left the area for college when I was 17.   It was a great place to grow up with the ocean encircling the town and there was pretty much no beach further than a 2-minute drive in any direction and "my' beach a 30 second walk down the street.

So of course, when I started to collect books, I knew I would seek out books about the area that I grew up in.    Whether it was Boston proper, Cape Cod, or even some about Massachusetts in general, I was intensely interested in the history and the culture of the home that I loved.

So, for this installment of Book of the Week, I am featuring a volume that focuses not just on Boston, but the towns and areas all around Boston Harbor in particular.  and of course, being the homer that I am, how could I not feature a book that has a whole chapter on my home town of Winthrop.

Though born in England, Moses King grew up in America and graduated from Harvard in 1881.  Though he worked in the publishing industry for several years when he left college, he actually wrote his first travel guide book while still in school, "Harvard and It's Surroundings".   He established the Moses King Corporation in 1888 and when he began in earnest to publish guidebooks on Boston, Philadelphia and New York City.

Really though, the books that King published, are not "travel" books per se.  Not like Baedeker’s, who had been publishing travel guides since 1827, which were more like gazetteers that provided more practical information for the traveler.  Baedeker's was more like today's Fodor's or Rough Guides.  King's Handbooks were more of what I would call Travel Writing which focused on the culture and history of the areas as much as the "points of interest".    They were similar to other travel guides, however, as they were updated and reprinted every few years or so.

"King's Handbook of Boston Harbor" was actually written by M.F. Sweetser and either it is just an incredible coincidence, or Moses was just a very popular name in the mid-18th century.  Anyway, Moses Sweetser wrote beautiful prose about the towns and islands around the harbor, reprinting snippets of poems and including over two hundred illustrations about its environs.  I also think it is pretty cool to see all the included contemporary advertisements for local businesses.

Not just a pretty book, King's Handbook of Boston Harbor is a great read for the origins of this part of the country.  Click here for the listing.   I also have a second edition for the impecunious; just click here.     Click here for a selection about Massachusetts titles.

Thanks much for looking.