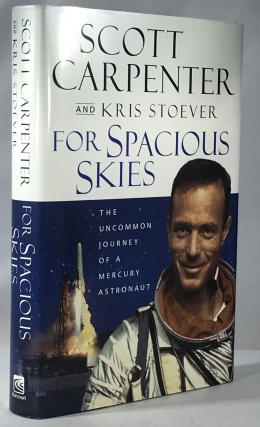 For this week’s installment I thought I would offer up something to commemorate the 50th anniversary of the NASA’s Apollo 11 mission to the moon.  Of course, it would be ideal to have a book written by either Buzz Aldrin or Neil Armstrong, who actually walked on the moon, or even Michael Collins who stayed with the Command and Service Module in lunar orbit.  But I alas, I do not.

I do not even possess any book written by any of the other Astronauts who walked on the moon.  And admit it, how much do we know about the others who made it to the moon?  How many can you even name?  Perhaps we know James Lovell, who was supposed to go to the moon on Apollo 13, but we only know him probably from the 1995 movie with Tom Hanks.  We likely know the name Alan Shepard, or we certainly should, as he was the first American to travel to space on Freedom 7, part of the Mercury Space Program.  (Read Thomas Wolfe’s “The Right Stuff” or see the 1983 movie for a convincing but still somewhat fictionalized account of the Mercury and America’s Test Flight programs).   But we probably didn’t know that he went back into space and indeed walked on the moon as part of the Apollo 14 mission.  If you see any footage of an astronaut hitting a golf ball on the moon, that was Shepard.

Admittedly, I did not know either until I started writing this blog.  Now, while I was in grade school learning about European explorers to the New World, the moon landings were happening contemporaneously.  But you would think these modern day Magellans would get more ink than they do,  and be taught in schools to some degree.  Hopefully, this milestone year will rekindle some interest in our space programs and I am very glad to see it was announced that we are planning on going back to the moon by 2024, and are to build a permanent settlement there.

By the way, though it has nothing to do with this week’s book, here is a full list of the 12 men who walked on the moon.

But for this week’s book, I do have the memoir of an original Mercury 7 astronaut, and the second American to orbit the earth.  Scott Carpenter’s “For Spacious Skies: The Uncommon Journey of a Mercury Astronaut”.   Released in 2002 and co-written with his daughter, Kris Stoever, it is as much a straightforward biography of an American family as it is a recounting of Carpenter’s interesting and somewhat controversial mission on board Aurora 7.  Though the mission went mostly according to plan and Carpenter made a successful re-entry and splash-down, there was concern regarding excessive fuel that was burned, (the controversy stemmed around whether it was Carpenter’s piloting that caused the issues or equipment malfunction), which may have compromised the safety of the craft and astronaut.

Very readable, “For Spacious Skies” also gives an insider’s account of the early days of the Mercury program, NASA, and the demands and sacrifices the astronauts endured to get ready for their missions.

Click HERE for details this beautiful copy  and though you can certainly find a less expensive reading copy, what makes this a terrific collectable is that it is signed and dated by both Carpenter and his daughter.  A wonderful way to start your Space Program collection.

Thanks very much for reading.