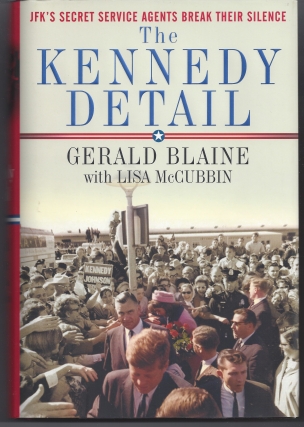 This week I have come across a very interesting title and one that is quite scarce.   Even after almost 60 years after John F. Kennedy was assassinated in Dallas, we have been collectively fascinated by the circumstances, the conspiracy theories, the tragedies the family has endured even to this day.  And though it very likely that we will never know the whole truth about happened in Dealey Plaza on November, 22nd, 1963, It seems we simply cannot leave it alone.

There have hundreds of books, no probably thousands, about the assassination, what led up to it and its aftermath.  This week I will focus on one written by someone who was there, in the very detail that was sworn to protect the President and his family.   This week we talk about 2010’s  “The Kennedy Detail” written by Secret Service Special Agent Gerald Blaine and co-written by journalist Lisa McCubbin.

A veteran of the Korean War “Jerry” Blaine became one of the world’s foremost authorities on high-level, high-profile security.  In 1959, he joined the United States Secret Service as a Special Agent and was very quickly hand-picked to serve on the elite White House detail protecting then President Dwight Eisenhower before serving Kennedy.

The book, a New York Times bestseller, deals not only with the operations of the various Secret Service details but also how the Special Agents dealt with the crushing reality that the most important person in the world, whom they were sworn to protect, was assassinated on their watch.

Blaine also served on the newly installed President Lyndon Johnson but in less than a year, realized that Johnson was no Kennedy and decided to enter the private sector.  What followed was a career combining his unique insights of security with the blossoming field of computer science.  From 1964 until 1990, Blaine worked for IBM in various capacities of company security but also contributed to the creation of data centers for the FBI and CIA as well as helping design the specifications for a mobile terminal and fingerprint scanner.  After IBM, he joined the ARCO oil company as their Director of International Security.

Certainly a great read and quite a bit of detail finally brought to light by the men and women who were there.  For what it’s worth, Blaine is 100% convinced that Oswald acted alone and no conspiracy existed.

What makes this particular copy special though is not just that Gerald Blaine has inscribed and signed it to a fan, as well as the co-author, Lisa McCubbin, but it has also been very uncommonly signed by a number of other Special Agents on that detail.  This includes Clint Hill, who was the agent in charge of Jackie Kennedy’s detail and he was the agent who memorably climbed onto the back of the presidential limousine after the President was shot and Jackie climbed onto the trunk.

It is also signed by Special Agent’s Ron Pontius and Winston Lawson who were on the Advance detail as well as Special agent Thomas Wells who was assigned to protect the First Children, Caroline and John John.

Lastly, it was inscribed and signed by Chi Li Wong who was an Executive Producer of the 2010 documentary of the same name, narrated by Martin Sheen.  According to Lisa McCubbin, who I had actually been in contact with, it was likely during the filming of this documentary in Dallas where it was possible to get so many of the agent’s signatures.  She said that though the agents are all still alive and in touch with both author’s, it was really the only time they were all together making this copy quite rare indeed.

But of course, it is also just a great book to read and copies of an unsigned First Edition are available for less than the original cover price.  Click here for a copy.